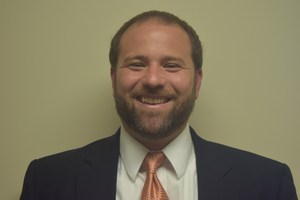 On July 1, 2017 Dr. Wesley Joyner began his term on the HCPS School Board. We'd like to welcome him to the board and to the Hopewell Schools family! Click here to read his profile story and his passion for education!

A new school year brought many new faces to the division, from students and teachers, to the School Board with the instatement of Dr. Wesley Joyner, a longtime Hopewell resident. The name strikes a familiar chord as his father, Larry Joyner, served on the board for a number of years, but apart from the name Dr. Joyner is blazing a different path from that of his father, a path filled with a dedication to education.

Describing himself as outspoken and curious, Dr. Joyner also admits to a deep love for the 11 square miles that makes up the city. A Blue Devils graduate of the Class of 1998, Dr. Joyner grew up in Hopewell and wants to keep the wonder in the Wonder City.

“I feel like Hopewell is one of those places that always brimmed with a lot of potential and a lot of it was untapped,” Dr. Joyner said. “And now I feel like you can start to sense an almost palpable change in the air.”

This palpable change, he said, began with the revitalization of the downtown and has continued with the ongoing discussions of riverfront property development and the newest addition of The Boathouse.

Dr. Joyner wants to keep that spark, that change, ongoing and he said the key to this first begins with economic development. This mindset began his journey to become one of the five members of the board; that and his energy and passion for teaching.

“I’m a teacher so I felt like I could bring some interesting perspective to the table and I have energy and ideas and I can at least have a platform to share them,” he said.

After graduating from Hopewell High Dr. Joyner went to the University of Virginia, graduating in 2002 with a Bachelor’s Degree in History. He started looking for PhD programs after spending three years in the workforce, still trying to find his calling and passion.

Dr. Joyner went to Virginia Commonwealth University for two years, from 2005 to 2007, and then joined the PhD program at the University of Southern Mississippi, earning his degree in 2013.

He became a new teacher shortly after obtaining his degree, in the fall of 2013, teaching history at Appomattox Regional Governor’s School, where he remains. Dr. Joyner currently teaches dual enrollment for U.S. History and Political Science with the courses being accredited through Richard Bland College.

Dr. Joyner was intrigued and inspired by the progress being made at HCPS before his arrival to the School Board, officially beginning his tenure on July 1. He specifically mentions Patrick Copeland Elementary and the staffs’ ability to earn full accreditation, when others thought all hope was lost.

He was drawn to the Cardinals applied knowledge of project based learning, a teaching concept taking shape throughout the division which puts students in the driver’s seat of classroom lessons.

In addition to his appreciation for project based learning, Dr. Joyner is also turning his attention to other areas of interest including teaching recruitment and retention.

On his path to earning his degrees, he found it somewhat strange that he was required by the state to get his teaching license, an unsettling fact he learned after joining the staff at ARGS.

Dr. Joyner was told he needed to take five courses to earn his teaching license from the state, a requirement he said was counterintuitive considering he was qualified to teach at a college or university level.

“The end result you are hoping for for a lot of these kids is that they will go to college to be taught by somebody like me,” he says with a puzzled looked on his face. “So it didn’t make sense…these sorts of ideas that are being discussed now about alternate routes to licensure and trying to support people with the real world expertise that kids can really benefit from. I think that might be an interesting thing worth exploring.”

As Dr. Joyner looks ahead to his upcoming years on the board, he is reminded of the significance of being the second Joyner to serve — with his father serving from 1995 to 2002 and again from 2011 to 2011 — a fact he holds close but remains steadfast in his desire to make his own mark on the board and with HCPS.

“You live in the moment and this is my time to do the job,” he said. “…I think the best things that I can say I’ve learned from my dad were just how to treat people, try as best as you can before you rush to too many judgements.”

As Chairman Christopher Reber opened the board meeting in August, welcoming Dr. Joyner to the board and introducing him to the community, he paused and looked down the podium to catch his eye, solemnly telling Dr. Joyner he occupied the same seat of his father.

“I am my father’s son,” he said recalling that moment. “I idolized him and so in many respects you might see certain instances where I try to emulate his behaviors and just use what he’s taught me from a father to a son as a means of guiding my own actions.”