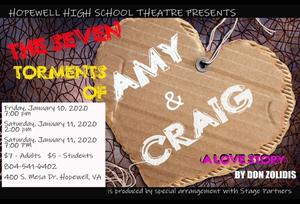 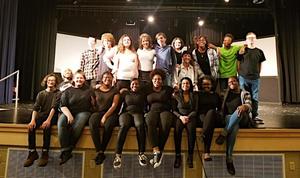 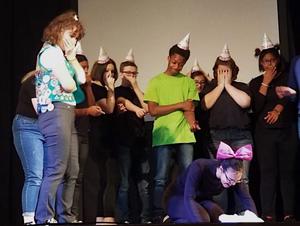 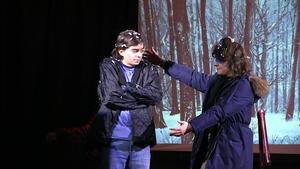 The Seven Torments of Amy and Craig is a play about how two teenagers go through trials and tribulations in their relationship.  This particular play, performed at HHS in January, was a story that each member of the cast could relate to. Mr. Smith explained his reasoning behind choosing this play, “I wanted to find a play that fits the students in this school and a story that my theater students could connect with.”  Little did he know that this play would also teach his students how to become a real family.

The rehearsals began in October, but the play was postponed when the director, Mr. Smith had a sudden stroke during practice the week the play was set to debut. The cast became much more than performers that day. It was their quick actions that saved Mr. Smith’s life. The cast rallied together and became a family over the weeks that followed. Jacob Rodriguez explained it this way, “It was bittersweet, kinda. Bitter that it happened, but sweet only because there was more time to prep everything.”

Even after having a stroke and going through speech therapy, Mr. Smith was ready to get back to his students and finish what he had started. The rehearsals for the play took over three months. Even the night before the play, they were still working on props; however, they managed to pull everything together. The cast: Mallory Davis, Kevin Arroyo, Keturah Crawford, Rhiannon Emmert, Emily Williams, Jacob Rodriguez, Joshua Paroongup, Jay Hooven, Phillip Irizarry, and Sean Lindsey did an amazing job!  For some, it was their first time doing theater, but others were veterans.  The audience and cast came away from the performance understanding that every relationship has its ups and downs, and most importantly, what being a family is all about.